After nearly a week of experience executing the global strategy, WICO released the first of what it’s calling a Global Targets Update this morning. The update incorporates a minor change to the calculation of expected population during the transition into annual rates of change, globally and by region, for population, consumption components, and Gross World Product (with and without inflation).

In a statement about the update, Secretary General Decatur emphasized that it should be interpreted as “guidance in support of our main focus, to maximize natural habitat and use no more than half what healthy ecosystems can provide on a renewable basis.” It was the most succinct summary of the strategy that I’ve ever heard. He finished on an uncharacteristically rousing note: “Collapse is intolerable, in every place, for all people, and for all life!”

When it was over, Maura browsed social media for reactions while I scanned the television networks. A familiar voice stopped me after the third one. Mark Luke was on the steps of the U.S. Capitol, giving what sounded like a rebuttal speech, flanked by leaders of business and conservative lawmakers from the House and Senate. It soon became clear that it more than a rebuttal; it was a statement of revolt.

“Innovation depends on a robust economy, but that is no longer possible.” Holding up a printed copy of a graph from the update, Luke continued, “Those of us tasked with the bulk of the work in saving the world are being robbed of the rewards that make it possible and worthwhile. Until now, we held out hope that governments would come to their senses, giving them every opportunity to do so, given what’s at stake, but this so-called update has confirmed our worst fear: that their delusions are beyond the power of reason to dispel. A six percent drop in the real economy in this coming year alone! It’s beyond insanity, and we won’t tolerate it. We can’t tolerate it. Starting today we will only supply what we are paid for, and we are filing lawsuits to get what we are owed for services rendered. Any attempts to nationalize our companies will be met with the utmost resistance, backed by a coalition in Congress that still values the rights of liberty and happiness.”

The speech was followed by high-profile politicians fleshing out the last talking point. The highest- ranking senator in the group, Lawrence Bilford, gave what I thought was the best summary: “Even in the darkest days of our republic, all rights were treated as equal, inseparable, and non-negotiable. One cannot trump the others without diminishing them all. Life can stand alone, but without the others it is intolerable. Without liberty, each man’s happiness is enslaved by one man’s definition, which in the end allows only that man a few like him to be happy. With less happiness to achieve, there is no incentive to put in the effort, and the whole society suffers from its lack. That is the wisdom of our founding fathers, the authors of the constitution that guides its application in the world, the document we are sworn to protect above all else because it defines who we the people are.”

“I didn’t fully understand until now,” Maura gasped, tightly gripping my hand as Bilford finished his speech. “It’s all or nothing with them.”

I recalled Decatur’s value statement. “Collapse is tolerable as a cost of letting them grow, as long as someone else is experiencing it.”

“They don’t accept the concept of collapse, Will,” she said. “My father used to joke about some people driving as if they were looking through the rear-view mirror. Except it wasn’t really a joke, it was an observation. If there are peaks behind you then there must be another peak ahead of you. This time, there’s just one big drop, and if they succeed, then everyone’s going to experience it.”

The new calculation better reflects expected changes in age during the transition, with fairly minor alteration to the details. Global rates of change through the transition are shown below: 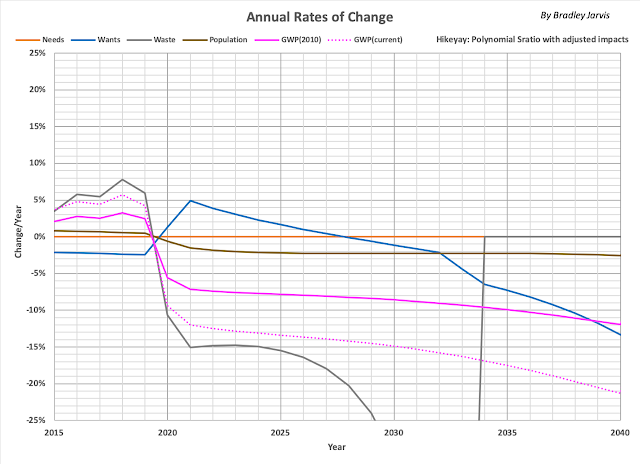 A simulation of the number of people in each of the seven phases of development is displayed for 2015-2040 in the following animation, with the corresponding stages labeled and color-coded: