After a week of planting native trees with me and Al as part of the new region-wide Restoration program, Maura awoke from a dream of a day in a world where such a program and the strategy that inspired it were never considered more than a dream themselves.

As “Mari,” she worked as a low-level financial analyst at a defense company that had no interest in developing truly life-saving technologies. The day began with a casual breakfast in front of her television, swearing at news reports of a self-destructing federal government led by isolationists who were focused on accumulating as much personal power as possible for themselves and their supporters. Her live-in fiancé John, an electronics store technician she met in a previous job, reminded her that the current focus on weapons development and profit-boosting deregulation meant they had a better chance of paying off her recent medical bills and moving from their tiny apartment into a real house just in time for their wedding at the end of the year.

Mari’s commute was excruciatingly long and perilous, spent mostly in start-and-stop traffic undeterred by automated signs requesting that people not drive due to elevated ozone levels exacerbated by vehicle exhaust. Bored by the music choices on the radio, she gambled on listening to more news, and almost caused a crash when a reporter announced that a deep recession might be imminent if not already in progress. She had a flash of a global trend analysis that Maura had done months ago, which anticipated just such a possibility in this timeframe as a precursor of a world population peak five years in the future. The implication of the report sent a shock through her mind; if it turned out to be true, then the peak might be too, along with the rapid fall toward extinction that followed.

She took a deep breath as she listened to the much more benign explanations being offered by economists: that the government’s corruption had critically reduced market confidence in it exercising rational economic policy; that recent GDP fluctuations indicated a reset was due following the last twelve years of growth; and that automation and other technologies were reshaping the workplace faster than expected. All of them would have been enough for the original Mari, but as Mari/Maura she knew there were much larger forces in play that demanded an understanding that encompassed more than strictly political and economic considerations.

By the time she arrived at work, the company’s Chief Financial Officer had already directed analysts in her office and elsewhere to run reality checks on the recession fears, develop likely scenarios, and recommend strategies for minimizing exposure to losses that might result. Technically, Mari’s role was to error-check the scenarios and strategies that the experts produced, but she felt compelled to share her concerns with them directly at the earliest stage. The dream ended following a particularly uncomfortable meeting with them.

“They acted like she was crazy,” Maura told me near the end of her narrative, “dismissing it as a dystopian fantasy that no rational person would subscribe to. It reminds me of the debate when WICO proposed the biosphere assessment. At least we finally agreed to replace opinion with facts, and accept all their implications. These people were limiting the scope of the ‘reality’ they considered, based on their own opinions, and blaming her for questioning it.”

I decided to play the devil’s advocate. “To be fair, she couldn’t divulge the source of her concern, what you learned, mainly because they reasonably wouldn’t believe it coming from her.”

“They had more than enough information already. Their scientists and a lot of activists were already sounding the alarm over several aspects of the extinction threat. The United Nations, their version of WICO, was even getting nations to enter treaties to deal with it. Private industry was pushing what they called renewable technology, an ill-conceived attempt to continue the status quo without a very limited set of environmental costs. Unfortunately, they failed to consider a lot of the critical costs.”

“You learned all that in a dream?” I asked.

“You can learn a lot when you share someone’s mind.”

“Which outside of a dream would sound crazy, right?”

“Right,” she admitted. “Some of the simulations I did when I was at WICO were turned into a story by my subconscious. I’m sure that with some research I could identify which ones they were, which makes the story worth telling.” 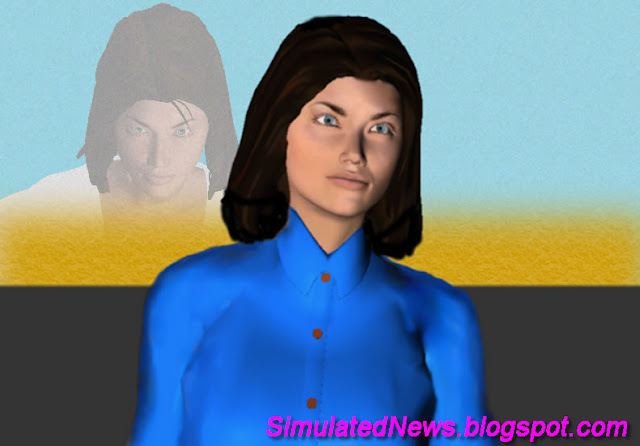 Mari’s world is based on the simulation Hella, whose history and future starting in 2015 matches simulation Green - what I judge to be the best match to our real world. In the fictional backstory (explored in Will Jackson’s Personal Log), Maura has a limited ability to observe and interact with versions of herself in the “worlds” of other simulations (as they can with her) - providing a means of comparing relevant parts of the simulations in any given story. 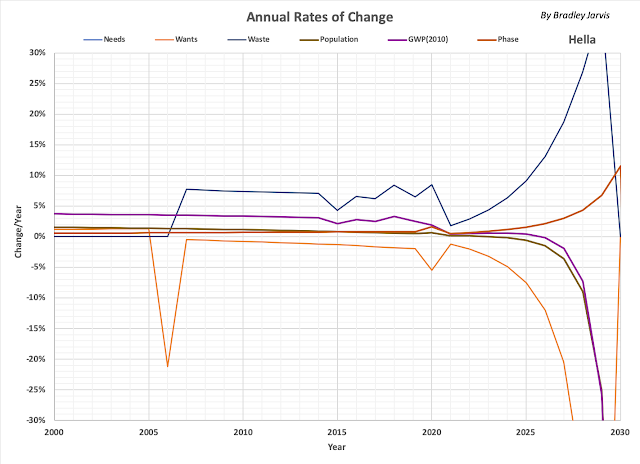 In all three simulations, self-sustaining impacts reduce total resources after 2014, but of course Hikeyay (Maura’s world) is intentionally decreasing consumption as part of the global strategy. 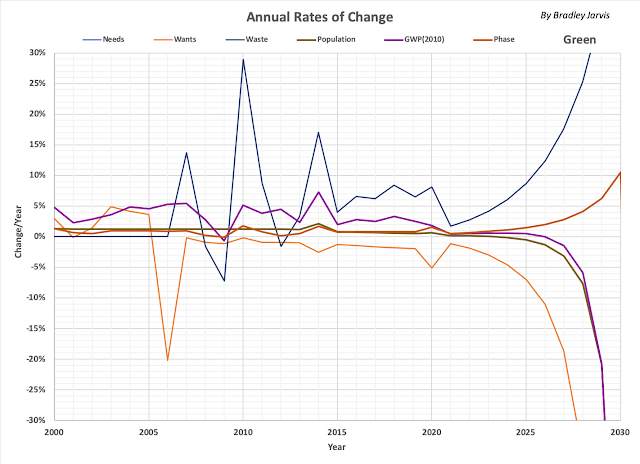 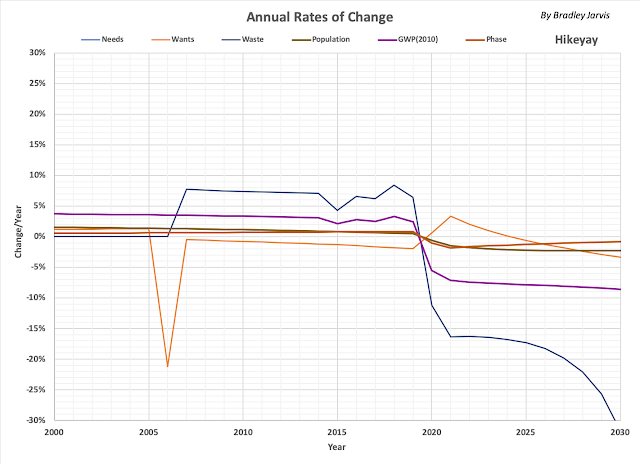 Posted by Bradley Jarvis at 12:11 PM No comments:

Maura recently had a new insight about the historical context framework she first lectured about on June 21. Today she shared it with other members of the history department, many of whom were onsite to prepare for the beginning of classes.

“WICO’s decision to add subregions got me thinking about how to make sense of all the new information.” Behind her at the head of one of the lecture halls, a world map displayed the thousand subregions color-coded according to which of the original regions they were part of.

“Instead of thinking in terms of ecosystem types, or biomes, we can look at them in simpler terms.” She pressed a hidden button on the lectern and only seven colors remained. “Here, they’re categorized according to their dominant phases. WICO came up with the concept of phases while trying to predict behaviors based on observed correlations with the ratio of basic consumption by people to basic consumption by members of other species.” She showed a graph of the behaviors as a function of phase. “Those behaviors include living longer, seeking happiness, and having children and dying which affects population. Each phase is a range of the ratio that corresponds to aspects of the behaviors. Until the addition of subregions, there was a lot more uncertainty in the predictions than some of us who worked on the global strategy were comfortable with. With refined data collection and testing, it is now possible to have better resolution on what phase a person or group occupies at a given time.”

She scanned the nearly-full hall and smiled coyly. “So… what does this have to do with history? Just as people and groups move through phases, all of humanity has moved through what I call ‘phase epochs’ that each correspond to a range of time where the characteristics of a particular phase are dominant. In my first lecture, I used a crude version of that concept to define ‘milestones’ marking off certain trends in history. Now, I propose being more explicit about the nature of the phases in all its manifestations as the characterization of life’s interactions over time and space.”

A review of the past two centuries followed, where she referenced the milestones in their new context and suggested some new directions of research using both historical records and the growing dataset of observations taken by professionals and the global network of trained citizens living out the transition.

A phase diagram for today is shown below, where L is life expectancy, h is happiness, Fert is fertility, P is population, R is consumption by a group, Cap is capacity (total resources), C is per-capita consumption, and Wealth/p is per-capita wealth (fixed 2010 dollars). Years listed at the 90% value are the original milestones. 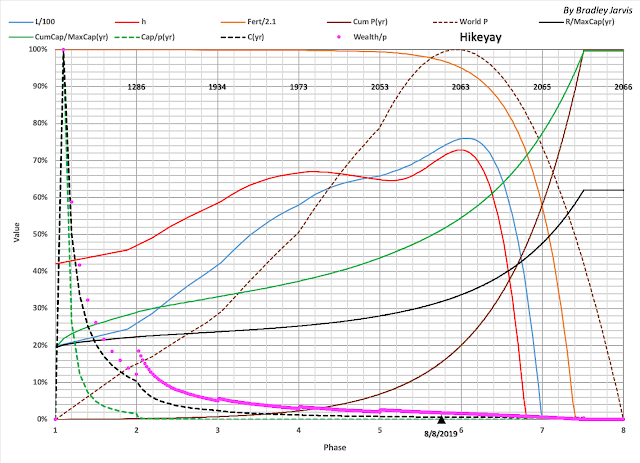 Phase epochs are based on which phases are dominant over a period of time. Every epoch except the first epoch is represented in the following graph, which shows the fraction of global population in each phase from 1800 through the transition for the simulated world as indicated by the difference in population ratio between any pair of colored lines. The black line is the projected phase for the population. 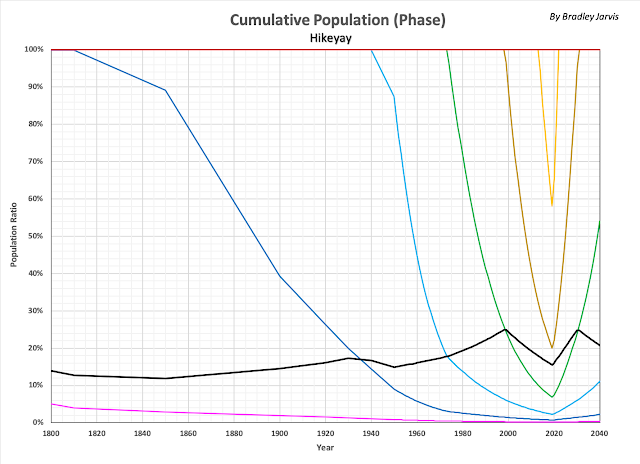 The global strategy intends to reverse the progress this year, and reenter Epoch 6 by 2022. Epoch 5 will be reentered in 2031, where the world will hopefully stay past 2040.

Following is the equivalent graph for our world (“Green”): 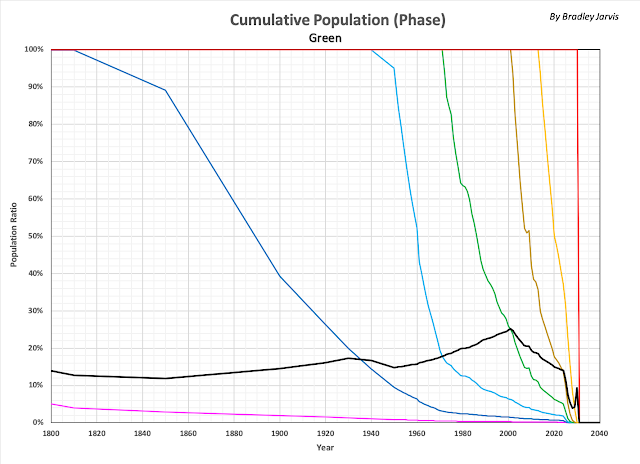 Posted by Bradley Jarvis at 3:37 PM No comments:

On today’s one-month anniversary of strategy execution, Ambassador Lazlo announced on video that progress is on schedule. Among her comments:

“The expected changes in key indicators have been observed, verifying our assumptions within known statistical uncertainty, but we don’t expect any noticeable declines traceable to our actions for another eleven months. Decommissioning plans are being implemented for the top unsafe technologies, especially in the energy, extraction, and weapons industries. National extinction response units have reported receiving all initial individual and community commitments, and are in the process of updating adaptation and transition plans to match the new subregion guidance, whose activation will trigger inter-regional interaction limits whose trials are practically complete.

“Regarding environment-assisting technology, WICO is closely monitoring all related development and deployment activities, which by their creative nature are not conducive to detailed scheduling, but are driven by the behaviors of natural systems they must influence - better known as self-sustained impacts, such as polar ice loss, marine ecosystem collapse from ocean acidification, and methane emissions from melting permafrost. We need to stop these impacts by the hard deadline of 2040, or else we will have added only another 35 years to the lifetime of our species.”

The changes in key indicators over the course of the month are depicted in the following graph, and are expected for both the simulated world and ours. Actual changes may be influenced by other variables that would not be reflected in a statistical approximation like this.

Note that this graph includes waste at the earliest phase.

The extension of time without stopping self-sustained impacts is the difference between the projected final years for the simulated world and the “Green” simulation that best matches our historical trend.

Posted by Bradley Jarvis at 3:48 PM No comments: