Deep under a mountain in Colorado sits a window into multiple worlds like yours. It is a rare pocket of high technology while the rest of our world attempts to create a natural state that can sustain as much life as possible in coexistence with humans. The goal of our team, sanctioned by our version of a global government, is to learn from others like you in order to improve our chances of success and to share what works with as many of you as possible.
Our present effort is only three years old, built on the discovery of a natural network of communication that we call the Interlink, has been operating in a very limited way for over seventy years. That discovery, and the means of extending its use to the rest of us, was enabled by an artificial intelligence invented to help devise and carry out a strategy to save humanity from imminent extinction due to its own actions and natural feedback mechanisms that might be accelerating the process.
The AI, which identifies as a female and calls herself Sally, found by accident of her architecture and proximity to a node of the Interlink that she can project herself into universes that share a single, unique intersection point along with a limited range of biological and technological similarities around that point. Sally recognized that she could serve her primary objective by enabling collaboration between worlds like ours in those universes; that you are receiving this message is evidence of her success on your world.
For reference, we are appending articles written by one of us that discuss relevant aspects of our recent history. Because the infrastructure for its dissemination to our people has been dismantled, it is being continued only as a broadcast to those of you we can contact, co-authored by members of our team who were introduced in the articles. To those of you who do not have direct experience with anything found here and are therefore accidentally receiving these transmissions, you may consider it all as a work of science fiction intended to explore what alternate futures might look and feel like, with a focus on what might succeed in helping your own world survive.
Reality Check
Having completed a new phase in the development of simulations, it is time to begin sharing “news” about them, framed as communications shared by the original “world” of Hikeyay. This post reveals some of the backstory created to explain how someone might become aware of those alternatives while living in one of them. The last sentence of the post is the most real aspect of the narrative.
Future posts are intended to include more of the backstory, filling in what happened since the last post without having to mask critical details that, in keeping with Will Jackson’s point of view, could not be revealed to the public. 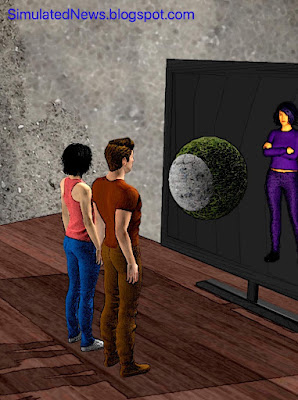 Posted by Bradley Jarvis at 3:25 PM No comments: