Last Friday’s anniversary of the Global Emergency declaration also marked six months since the execution of the global strategy that resulted from the declaration.

In a report to WICO yesterday, Maura summarized the world’s progress in terms of our work on developing historical context and guidance. Following is an excerpt.

“The most useful measure of the state of a population continues to be the ratio of ecological resources consumed by people for basic needs to the resources consumed by, and comprising, other species. Expressed in terms of activity phases, it is predictive of, or strongly correlated to, the range of global variables we care most about at regional and global scales, since the phases define relationships of people to their natural environments and, by extension, each other.

“Applying the phase model to history, we have observed what would be expected from the merging of groups of populations and environments with larger ones that consume more per person: growth of a global population that is expanding through each of seven phases with regard to the world’s total environment.

“The merging is done in the first phase, colonization, and continues until there are no more new groups to merge with. Converting merged groups into integrated larger groups is done in the development phase, which includes a workforce dedicated to managing and converting resources so they can more efficiently meet people’s needs and wants while continuing to grow the population. In the third phase, adaptation, a growing sense of identity with the combined group orients its population toward common goals such as the customization of people’s environments in order to maximize happiness. A maximum in happiness and consumption of renewable ecological resources is achieved in the climax phase, which would be the final phase if the means and will didn’t exist to consume more than ecosystems produce.

“Using more requires consuming the sources of what is already being consumed. In this exploitation phase, people gain both a new maximum in happiness and a maximum in life expectancy which is short-lived because they are depleting resources that cannot be replenished. Continued efforts by colonizers to search for more resources, and any success drives the depletion that forces those in the climax phase into a new phase, decline, where they experience a precipitous drop in happiness and life expectancy. When life expectancy reaches zero, there are no more children and the people in the resulting phase, decline, will soon face the final phase: death. When total resources are low enough that the entire population as one group is statistically in the termination phase, then it is facing near-term extinction.

“The Global Emergency declaration was issued as the global population was less than six years from entering the termination phase. In terms of phase, it is where it was a half-year before the declaration, still in the exploitation phase. The preferred outcome of the global strategy adopted in response is expected at the end of a 20-year transition that was started in July. The closest historical analogue to that outcome is in 1999 when the world was in the climax phase and people were about to enter the exploitation phase; but with key differences that per-capita consumption will be held constant at the level it was in 1909 and there will be no population growth.

“What happens after 2040 depends on our success in stopping the external impacts from reducing the total amount of resources. Failure could result in a spike in deaths equivalent to the whole population being suddenly treated for the bubonic plague, with the effect of reducing overall consumption to a level that might be sustained for no more than another 20 years. Projected spikes in phase and zero birth rates lead us to believe that it is most realistic to expect extinction by that time.”

Global variables in the simulated world as a function of phase are shown below:

The range of phases experienced over time is shown below: 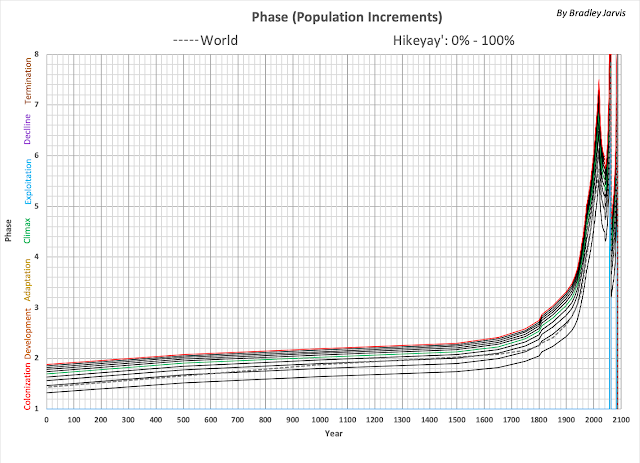 This is unique to the simulated world of Hikeyay (simulation Hikeyay'). Following is what the phases for our world would look like if we attempted a similar strategy starting in a year later. 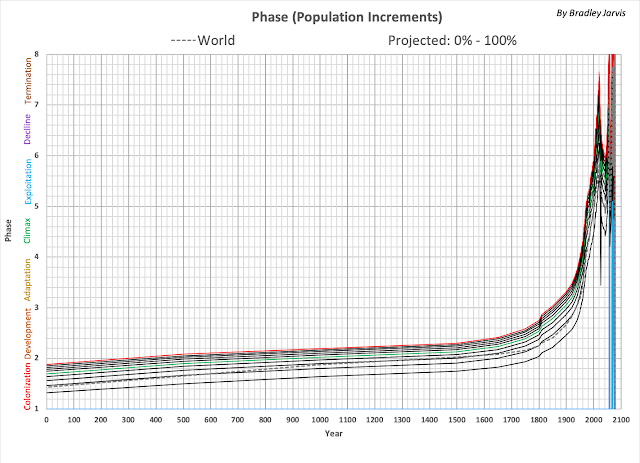 Posted by Bradley Jarvis at 4:00 PM No comments: