Since my last entry, Maura and I have finished moving into a new home and been busy analyzing all of the information collected by WICO relating to the preparation and implementation of the global strategy to delay extinction. Sally, who has since adopted the surname Sanda (her name until she came out as a sentient artificial lifeform), spared enough bandwidth to help us with much of the data collection and analysis.

We’ve made several discoveries, among them the relationship between social leadership characteristics and the changing distribution of population between activity phases. This naturally required an historical perspective that Maura was happy to provide:

“To be effective, leaders must address the range of life experiences in their community or else the community loses cohesiveness. Our biology has prepared us to live as colonizers, the first phase, but cultural and technological innovations have enabled us to inhabit the other six phases.

“One if the most significant of the cultural innovations was a response to most people having become developers, in the second phase. The creation of a government where every person has equal value, and is responsible only for what they do instead of who they are, provided a way for developers to peaceably coexist with the remaining colonizers and coordinate their actions to potentially benefit everyone.

“As the world entered the adaptation phase in the 1800s, roles and experiences diversified with the use of technology to convert natural environments into artificial environments, and a growing number of governments extended their main tools for regulating behavior, laws, along with new ways to enforce them, to deal with the changing range of interactions people could have with those environments and each other.

“The number of people increases exponentially with increasing phase, so there is typically a net loss of people in the lower phases even as the total population gets larger, with the greatest rates of loss when new phases start being populated. Such transitions are therefore the most fraught with danger, which the world found out a century later when the fourth phase was breached with twice the population at stake. It took two world wars to set the stage for a truly global community whose scale would be necessary to manage the consequences.

“It’s lucky for us that the WICO framework was chosen for the design of that community. The magnitude of the changes underway and the threat of misjudging them that the last war exposed was enough to convince the world’s leaders to be cautious and provide a means of sharing knowledge and coordinating activities that could have potentially global impact. While national autonomy was still prized, having too much presented an unacceptable risk to everyone; and so, monitoring and control mechanisms were adopted following a vigorous debate about basic values to be adopted on a core level by every organization on the planet.

“Unluckily for us, the risks of developing fossil fuels and their derivatives were not considered as thoroughly as they should have been. Leaders were too fixated on its promise of quickly achieving the ultimate goal of maximum happiness, population, and life expectancy. They also failed to also consider that the goal itself might be a trigger for catastrophic consequences involving variables they didn’t even know existed.

“The combination of those two oversights led to a series of what we now know as transitions to higher phases over the following 70 years. Despite not understanding their cause, WICO was able to reduce the most disruptive aspects of each, such as radical flipping of ideological dominance within component governments, by tracking and anticipating effects while initiating coping protocols through local agents such as the Extinction Response Units. Understanding their causes and switching governance to ecologically-defined regions and sub-regions will make those efforts more effective and efficient as we intentionally move through transitions into lower phases.”

Along with the majority of other nations, the United States is holding its last major election this year. The winners, most of whom have already been identified, will be responsible for decommissioning of government infrastructure and functions along with any remaining handoffs to the Extinction Response Unit and relevant sub-regions.

History matches ours up to the end of the second world war and only approximates it after that.

The annual change in the number of people within each phase over the period 1950-2050 is shown below for the simulated world of Hikeyay Prime, as a fraction of people in each previous year. 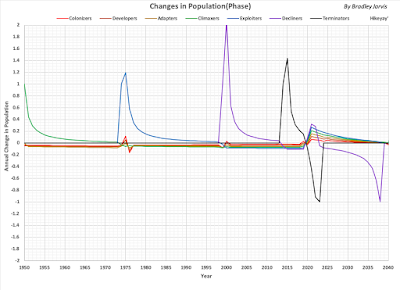 For reference, the following is the annual change for simulation Green (matching historical data) for the period 1950-2040: 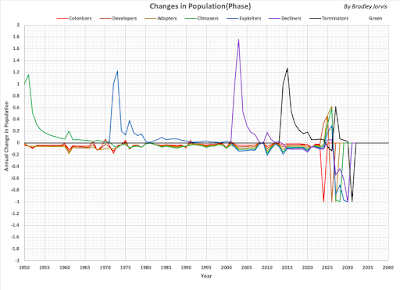 Note each pair of peaks, where a large peak is closely followed by a smaller one (such as the pair for Exploiters consisting of a peak in 1973 and the smaller one in 1976).
The large peak marks the transition of people into its phase which appears to be correlated to the dominance of politically right-leaning leadership. The smaller peak appears to be correlated to dominance of politically left-leaning leadership.
This is in stark contrast to the peaks in Hikeyay Prime, a difference that is explained away by Maura as a consequence of WICO’s organization but is actually due to the more well-behaved function used for the underlying ratio of remaining resources to human needs. If the political correlation does hold up for Hikeyay Prime, it is likely with the decay portion of the larger peak.