In August, Maura discovered a potentially fatal flaw in the deployment of the atmosphere cleaning genetically engineered microbes (GEMs) based on data from the monitoring station located at Test Community 13. The station’s data was reproduced by portable equipment standards kept in Boulder that had just been calibrated with WICO’s prime “gold” standards in London. Concern that the source of such a malfunction might be shared by other stations prompted consideration of suspending further GEM deployment until its cause could be found.

Time was critical. A very active fire season that was decimating forests and dumping so much toxic pollution into the air across all continents that health effects were expected to significantly add to the casualties forecast for the transition. It was hoped that the GEMs could alleviate the impact by quickly consuming the associated carbon emissions. Unfortunately, the anomalous data, if real, would put a damper on that hope.

“It’s all about size,” Maura explained at a briefing with WICO. The GEMs are essentially tiny balloons that inflate while they ingest a target pollutant, convert it to a safe form of biomass, shrink to a predictable size, die, and fall to the ground where they become food to other microbes. They are large enough to be eaten and not small enough to be dangerous if they are inhaled by something larger. “Measuring sizes and correlating them with contents taken from samples at monitoring stations, especially at altitudes like ours, are critical to validating estimates of their distribution based on satellite data. Those estimates are used to indirectly assess their effects in other areas. The measured sizes should closely match what the laboratories predict based on the contents we’re finding, but they’re not. There’s not even a useful statistical correlation.”

Verification tests passed at all but one of the other 199 other stations. The station at Test Community 12, located in Hawaii, barely but repeatably failed in one of the four size categories instead of all of them as our station does. Release of more GEMs was stopped for two weeks afterward, while additional tests were run at Sally’s direction to help troubleshoot the problems. The AI also worked to identify what the risks of continuing deployment might be.

Four negative outcomes of using GEMs had been anticipated and addressed in their design. The first outcome was that the GEMs would seek out natural sources of greenhouse gases and directly cause mass die-offs. The second was that the dead microbes would themselves become a major source of pollution that was toxic throughout the food chain. The third was that pollution consumed by the GEMs might be released back into the atmosphere by some other organisms instead of being cycled into other, safer forms that generally promote healthy plant and animal growth. The fourth was that the GEMs would change the atmosphere’s chemistry to become more harmful to life either directly or by unleashing unintended and uncontrollable natural feedbacks.

Sally completed her risk assessment and recommended permanently stopping the GEM deployment. She justified her recommendation in a brief statement: “Inability to identify evidence that the measurements at the two stations are erroneous forces consideration of a finite probability that the measurements are accurate. Reasonable assumptions of that accuracy introduced into simulation of their impacts introduces significant risk of unacceptable pain, suffering, and death relative to the known alternatives.” Today, WICO made it official and accelerated the search for viable new alternatives.

More thought about the potential downsides of using GEMs made it clear that their use on a global basis is too risky for implementation, as reflected in the “four negative outcomes” described by Will. Sally’s statement is intended as a subtle that uncertainty represents existence of the unknown, that is either real or a characteristic of ignorance potentially manifesting elsewhere.

The graphs used in the last entry do not assume any reduction of greenhouse gases, such as might result from the use of GEMs or other carbon capture technology. Recent simulations of the Timelines model have converged on a new strategy for reducing total consumption that involves decrease of both population (not replacing deaths) and per-capita consumption, much like that used by Will’s world. The trajectories of global variables, beginning in mid-2022, are very similar: 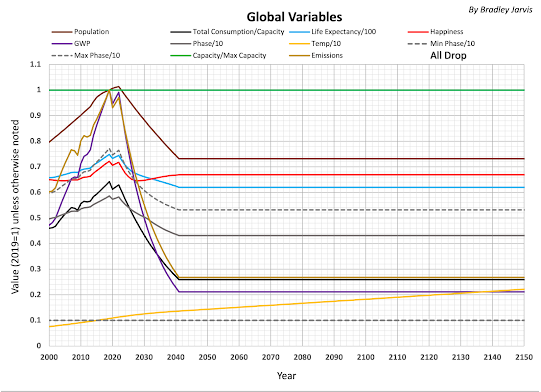 Posted by Bradley Jarvis at 5:42 PM No comments: