Andy’s Riddick’s skepticism last week rattled me enough to look for historical evidence that supported or refuted it. Recalling that a depression and a world war coincided with the built environment (what Maura calls “wants”) exceeded what people consumed for basic needs, I decided to study how people reacted to the growth of waste over the last decade. Maura suggested that I focus on the economy, even though the most obvious similarity was a prolonged war in a region with the means of creating the most waste.

What I found was stunning. It looked like a few rich people were getting a lot richer by essentially peddling dead zones.

“What you’re seeing is an artifact of averages in an economic feedback loop,” Maura said after reviewing my results. She explained, “We’ve been creating waste for decades, but natural systems were able to turn it back into useful resources over a reasonable period of time such as a year. Then they couldn’t keep up, and the difference started making regions uninhabitable, like trash piling up in your house when it can’t be hauled away to the dump.

I saw her point, adding, “And the people who enable the trading are making the most money, because all they have to move is paper and data instead of paying for something physical to be processed and moved.”

“Right,” she said approvingly. “Frankly, I’m surprised people haven’t revolted, causing something like a recession that would trigger massive regulation and stop the production of waste. Unfortunately, that economic feedback has created natural feedbacks that our present intervention may not be able to slow or stop.”

“The causes of the self-sustained impacts,” I guessed.

She nodded sadly. “The impacts are similar to waste, and are accelerating on their own.”

“Does your father understand all this?” I asked her.

“I’m sure of it. Dad’s the smartest person I know, with my uncle David being a close second.” That was a huge compliment. “He already expects the people who profited from the waste to try profiting from the self-sustained impacts, along with others who hope to get rich too.”

“That’s not going to happen, now that everyone knows what’s happening,” I said half-heartedly as the plausibility what she said began to sink in. “We’ve also got some pretty powerful government intervention in progress.”

“I’m with you,” she said, “but he’s worked in government most of his life and knows its limitations as well as anyone, along with the people he’s served and fought. He’s also got an excellent record of being right.” She paused for a few seconds, staring into space as I’d seen her father do a couple of times when he was thinking hard. “There’s something else to consider. This year, for the first time in history, the amount of waste will exceed what we consume for basic needs.”

I suddenly felt light-headed, seeing her point. “Like in the 1930s.”

She nodded. “When wants exceeded needs for the first time in history. And that was followed by the largest war in history.”

Tonight, Al will join Mara and me at her parents’ house for a dinner in celebration of Transition Day, which is the official start of the global strategy execution. I don’t feel like celebrating in light of what I learned over the past two days; instead, I’m inclined to brace for a long fight.

Explanations are my own hypotheses based on simulation.

The distribution over time of per-capita needs, wants, and waste for the simulated world Hikeyay is shown below. Note that in the 1970s, all renewable resources were being consumed by humanity, corresponding to the peak in wants, suggesting that a maximum rate of recycling was reached. It took another three decades for significant accumulation of waste. 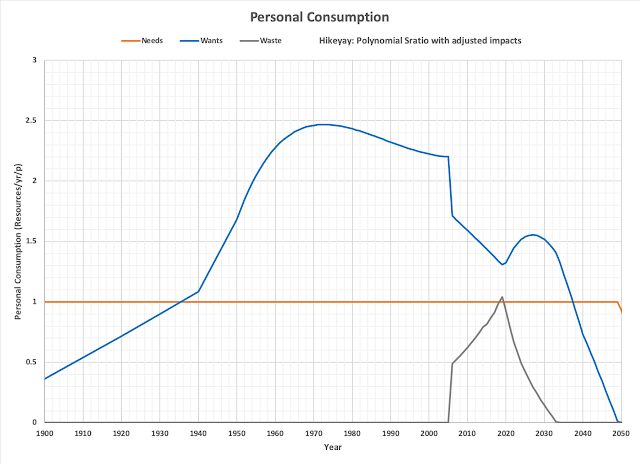 A similar pattern emerges in projections of reality, represented by the simulated world Green, which did experience a recession following the appearance of waste (2007-2009): 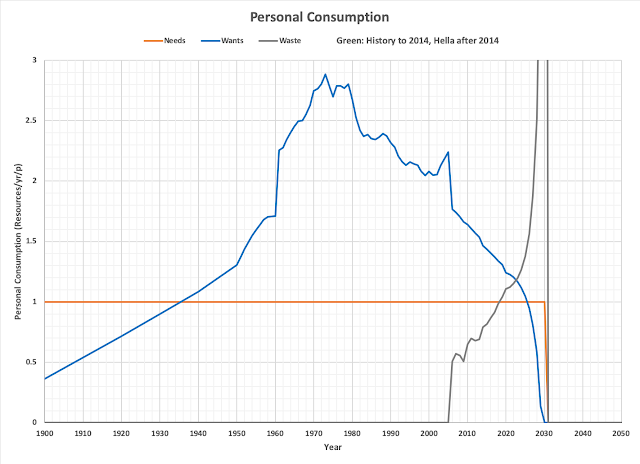 Posted by Bradley Jarvis at 1:33 PM