Many noted the coincidence of hopeful acceptance of an immigrant in the Christian story with WICO’s recent release of updated migration recommendations. They seem to be consistent with the simpler 30/20 rule – consume no more than 30% of what’s available (capacity) within 20 years – which amounts to an average 4% annual decrease in per-capita consumption while not having children.

If the 30% cannot be reached by cutting back, cleaning up, or removing of what can’t be used by other species, then people will leave to make up the difference. Where they go will depend on extra capacity and how much easier it would be to reach the 30% if there isn’t any. Presently no nation has extra capacity (less than 30% consumed), so migration is currently based on people’s ability to reduce their consumption and the risk to their survival if they stay where they are.

About half the population found in 104 nations is extremely challenged, so priority is being given to helping those who can be helped and moving the estimated 30 million now in harm’s way.

Those in harm’s way are arbitrarily chosen as those in nations with a maximum phase of 7 or higher in 2018. The global total today is 3.2 billion.

For maps, see “Global Strategy Maps.” For more about how Will spent his Christmas, see Will Jackson’s Personal Log.

Posted by Bradley Jarvis at 3:52 PM No comments:

Today the world formally approved an update of the global strategy that incorporates the Leveloff trajectory. This coincidentally followed certification of Sally’s health and reliability by the AI Evaluation task force that Maura and I were on for nearly a month.

We learned from the task force that STRIDE (WICO’s office of Strategy Tracking, Response, Integration, Development, and Execution) is now primarily focused on developing ways to avert the large spike in deaths expected if efforts to stop external impacts are not successful during the transition. Relevant research organizations not already involved in stopping external impacts are being asked to assist in this backup adaptation planning. Many of those organizations, referred to by STRIDE as backup adaptation planning organizations (BAPOs), are departments and laboratories in colleges and universities, while others are consortia that are large enough to have their own staff and dedicated resources.

Of course, I have direct experience with two of the first BAPOs, which are part of Colorado Holistic University where I work. In addition to performing their educational functions, which remain extremely valuable in their own right, the history and physics departments explore the theoretical and empirical underpinnings of the global strategy to map out new scenarios. Those scenarios are tested using physical and social analogs from both the recent and distant past with the assistance of experts from other departments who are now available to help, as well as others with specialized experience such as me, Al, and former members of WICO’s test communities.

Maura is using lessons learned about habitat rehabilitation technologies during our working honeymoon to include more likely ecosystem states in existing and new scenarios. Al, who took off on his own after the wedding, remains in Hawaii to get direct data that can be fed into the environmental model that our physics department is contributing to and using. Sally’s maintenance break resulted in a considerable increase in her efficiency, freeing plenty of bandwidth to help with the entire effort in addition to her other duties.

The updated simulation, now called Hikeyay Prime, has the following present and future:

Past and projected annual rates of change are shown below. 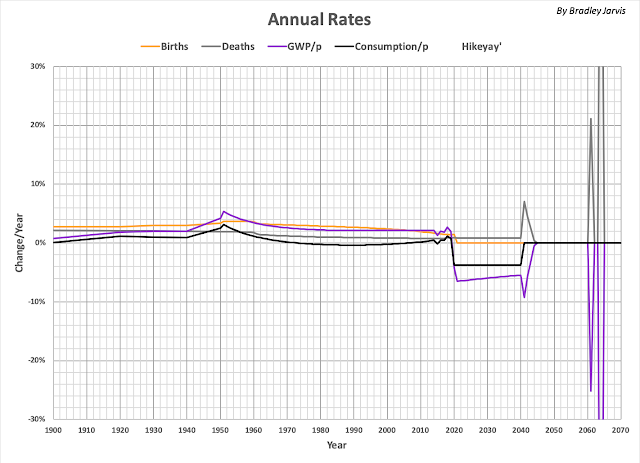 Following is what today and a likely future looks like in a simulated version of our world.

Posted by Bradley Jarvis at 1:27 PM No comments: