A recent spike in births similar to the baby boom of the early 1950s now threatens to derail the world’s efforts to reduce the risk of imminent extinction. “Clearly the mechanisms put in place by the global strategy have failed,” WICO admitted in a recent statement. “A task force has been convened to study the problem and provide both an explanation and a solution as soon as possible.”

Maura is a member of the task force, and has made its mission the top priority of our team at Colorado Holistic University. Sociologists and biologists at other research organizations around the world are also collaborating, with Ambassador Lazlo leading the task force from London and personally directing WICO’s resources in the effort.

Our investigation focused on clues from history and observations from simulated “worlds” that Sally developed in parallel with her work on the global strategy. The AI herself was surprisingly reticent about suggesting an explanation, which in a human might have been interpreted as a sign of embarrassment. She has, however, devoted considerable bandwidth to helping us come up with one on our own.

The most promising hypothesis so far came from one of the simulated worlds, whose history diverged significantly from ours just after World War Two. Its population was wary of unknown threats to civilization, including consequences of ravaging the natural world. Instead of pursuing unlimited growth, they sought to create a healthy world that would maximize how long people could live and thrive. They set a sustainable limit to their standard of living and achieved it by deliberate, careful development of technology while maintaining a slow increase in population marked by both a low birth rate and a low death rate.

“It was their caution that saved them,” Maura concluded after intense study of the simulation using her ability to experience the simulation as if it was a real world. “They knew what they wanted and what they could have, and stopped when they had it. Change was a transition only, which they would be completing right about now.” She paused, considering the implications for our current situation. “We, on the other hand, have been anything but deliberate. We’re in a panic, and we’re going too fast. I suspect that our overly-aggressive reduction of consumption this early in the transition has triggered a natural human response to having more resources available: people are procreating to fill up the space, no matter what anyone says.”

I noted that Sally would have known all that, and should have planned for it. “Maybe she did,” Maura suggested excitedly. “The most obvious consequence of this baby bubble is a sudden increase in the number of young people in the population. What would that do for us?” She did a quick calculation. “That’s what I thought. I’ll bet Sally either made an oversight or she didn’t think we’d go along with this part of the plan.” I was confused. “We need enough people capable of having children after the transition to maintain our starting population, which they’ll be old enough to do.”

The trajectories of global variables have been adjusted to replace natural losses of older people with youth who can sustain the population. This is done by exponential decreases in total consumption (4.25%) and the ratio of needs to remaining resources (3.51%) until total consumption can be sustainably supplied by naturally replenishable resources (total consumption less than 0.8 Earth per year). Final per-capita consumption is 1.4 times basic needs per person. 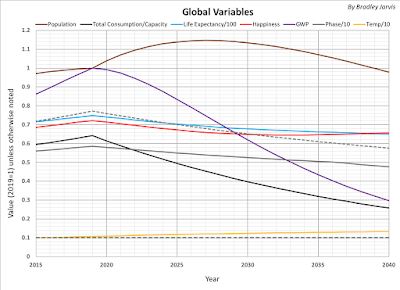 The condition of the world in mid-2020 looks like this:

An interesting coincidence emerged from my study of the impact of our coronavirus pandemic on population: the projected change in age this year is equivalent to the same number of people as in Hikeyay Prime (126 million). Old people dying in our world cause the same age change as additional births in Will Jackson’s world.

Simulation Maria has the following trajectories. 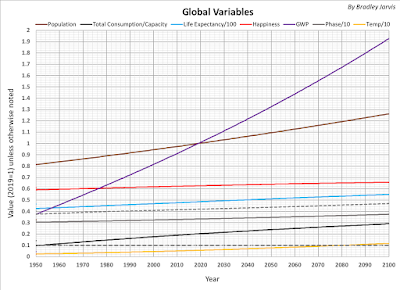 In mid-2020, that world has the following characteristics:

Posted by Bradley Jarvis at 4:19 PM No comments: