“When you encounter a built environment such as a building and the ratio is too high, you can try to remove it unless the impact of doing so forces the ratio higher,” Ambassador Lazlo said at WICO’s press briefing in response to a question about lowering the people-to-nature ratio, which she admitted was one of the basic tactics for executing the strategy. “One way to minimize that impact is to disassemble some of it and let nature do the rest.”

“You mean, let the place go to hell,” the reporter said, “like opening the doors and not doing any maintenance.” The L.A. Messenger’s Harry Tanner was as disgusted as I’ve ever seen him.

“That’s crazy,” Laura Marcus from the Sacramento Watcher blurted, and there was a murmur of agreement in the room. “If it’s a house, where will people live?”

Lazlo answered, “They can occupy a smaller controlled space in the house, or find a place with lower impact.”

“When was the last time the world met your standard?” Tanner asked.

“The mid-1980s, when there were about five billion people, about what our target population is.”

“So, everything built since then has to get torn down?” he pushed.

Lazlo stared at him. “It’s not that simple, or possible. But you already know that, Henry. A lot of other things have changed. Think of it as replacing most things with fewer and better things.”

“How many regions will be in the final strategy?” I asked, changing the subject.

“We’ve got between 110 and 120 right now. The starting number is likely to be 113, unless test results suggest otherwise.”

A slightly different version of the chart Sally showed me was displayed on the screen behind the podium. “This is one of our test cases,” Lazlo explained. “It’s based on the end-state of the drawdown, after 2040. Each set of concentric circles represents a region, with relative amounts of people’s basic needs, consumption, and total resources approximated by the areas of the circles, which of course are not to scale. The equation represents the ratio of the entire group of regions. In this case, built environments are in place, which are part of consumption. Given the choice of reducing population or consumption beyond natural attrition, we will prefer consumption.”

She clarified that by “natural attrition” she meant replacing people who die from old age, just like the people are expected to do during the drawdown which is the subject of the majority of the strategy. 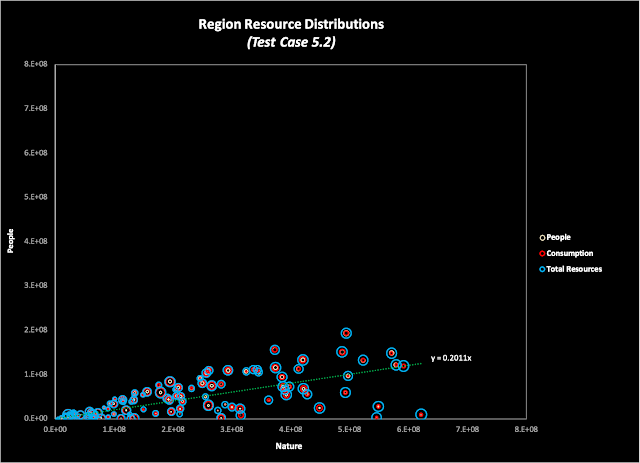 The chart is a simulated random sample of “regions” as described. There is no correlation to actual data. Names and affiliations of reporters are totally fictional.

Posted by Bradley Jarvis at 5:42 PM