Maura and I started the working part of our honeymoon yesterday, visiting one of three sites on Hawaii’s Big Island that WICO is using to integrate and test some of the technologies that will likely be deployed to rehabilitate land and water ecosystems as part of the global strategy. The site was one of WICO’s test communities until three months ago and has many of the original personnel still working there. I recognized several of the names from my brief time in Quality Assurance; and as their former boss, Maura was recognized by all of them.

“Invasives remain our biggest problem,” said Dan Rogan, the leader of the testing group, as he took us on a tour. “We’ve got robots out hunting the worst of them, most by air.” A small drone whirred past us, as if for emphasis. “They’re still a stopgap, of course, because those technologies have too high a footprint beyond about two years. You’re going to hate this, Maura, but we’ve been given a green light for biotech alternatives.” She stood stunned as he continued, “The effort is being led by a company that’s trying to get them to gorge on pollution and then safely decompose when it kills them.”

“Safely?” she asked. “How can something like that be safe? You’re not testing it now are you?”

“Two years,” I said as he shook his head, “Wouldn’t you need that long just for development?”

He shrugged. “I’m told that they’re fast-tracking it.”

“You don’t fast-track something like that!” Maura was as agitated as I’ve ever seen her.

“I heard the transition time might be cut in half. Maybe they don’t have a choice.”

“I doubt that will happen,” she said. “Nobody’s going to sign off on the resulting casualties.”

“We’ll be ready if they do,” he said optimistically. “Meanwhile, we’ve also got to deal with drought and typhoons. Some of the new portable building designs with attachable shielding and catchments are showing a lot of promise. As soon as they’re proven, the county will deploy them to vulnerable communities and safer areas that people can use as soon as possible.”

“What about volcano eruptions?” I asked while we walked to an area dominated by three demonstration structures that resembled lumpy yurts.

He explained that air pollution was the main issue after people got out of the way of lava. “In addition to portability, suitable filters and building materials are being designed into the buildings.” He then invited us to stay overnight in one of them.

The descriptions of the technologies are fictional and intended mostly as requirements.

Discussion of the timeline is based on multiple simulations related to the “C-low” scenario previously discussed. For example: 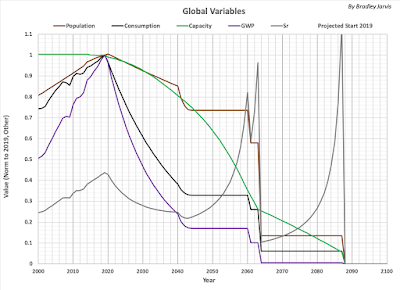 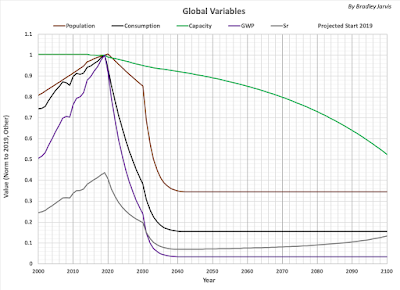 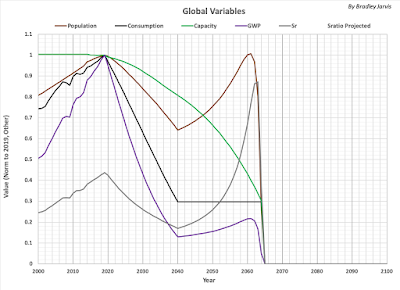 Posted by Bradley Jarvis at 2:24 PM